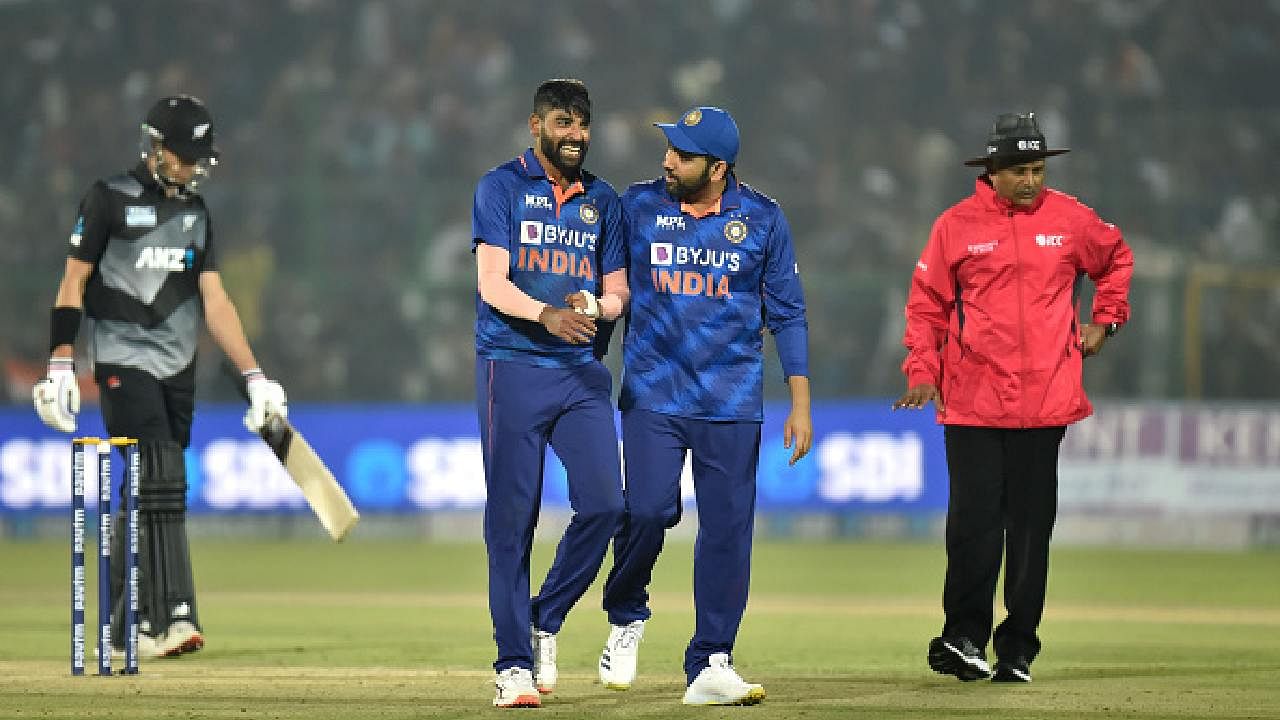 Mohammed Siraj split the webbing in his hand in the first T20I against New Zealand and might not take part in the 2nd and 3rd T20I matches for the Indian side. And, Indian cricketers Dinesh Karthik and Ajay Jadeja have picked the players whom they feel can replace Siraj in the Indian playing XI.

Karthik feels that the ‘Men in Blue’ can play anyone out of Harshal Patel or Avesh Khan as a replacement for Siraj. The veteran wicket-keeper batsman added that Patel might be a better option as he can change his pace cleverly on a slow wicket in Ranchi.

Karthik also said that Avesh Khan might warrant a place in the Indian playing XI. Karthik opined that India already have two medium pacers in Bhuvneshwar Kumar and Deepak Chahar who operate around the 135 kmph mark, and Avesh Khan can bring with him the extra pace.

“Both of them are bowling at the best of their careers so far… So you can blindly play any one of them. I personally feel Harshal Patel will be better because obviously, you know, the change of pace in Ranchi [which is a] slightly slow wicket.

Avesh Khan is very good with slower ones as well but Harshal Patel is bowling with such good rhythm that you want to give him the opportunity and see what he brings to the table. But another way you look at it is – you have somebody who bowls 135 in Deepak Chahar and Bhuvi. If you want someone with more pace then the option is Avesh Khan. It’s a good headache to have,” said Karthik while speaking to Cricbuzz.

Harshal Patel is the one I will go with: Ajay Jadeja

Ajay Jadeja feels that Harshal Patel will be the right choice to replace Mohammed Siraj in the Indian side. Jadeja reasoned that when the batsmen are trying to dominate the proceedings, Patel can use his slower delivery to good effect. Jadeja also added that Patel can bowl in the powerplay overs as well as the death.

“The way Siraj was used, probably Harshal Patel because he bowled one in the powerplay and two right at the end… what he has done in the IPL, the reason why he’s been picked in the side – his strength is that when the game is moving at a different pace and the batsman is trying to dominate that’s when his slower one becomes more useful. If you have to use him the same way and the others around then Harshal is the one I’ll probably go with,” concluded Jadeja.

100MB @100MasterBlastr
57 minutes ago
Tilak Varma had a phenomenal season and that earned him a place in this list. 💥