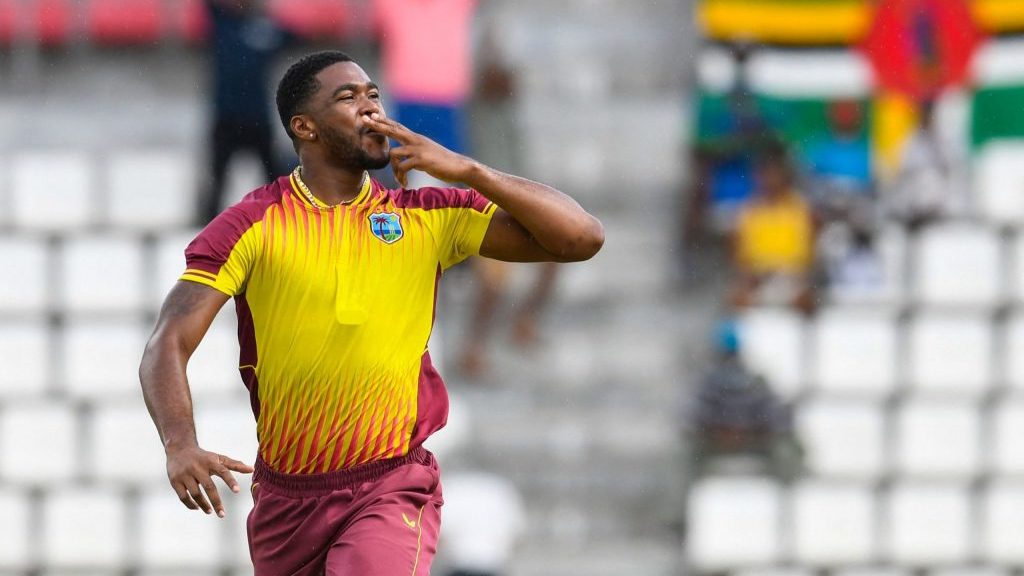 The second T20I between West Indies and India witnessed a historic feat as Obed McCoy delivered a sensational spell. Cutting through the Indian batting line-up, the left-arm pacer picked up six wickets. India crashed to 138 all out and the hosts chased the total down with five wickets remaining. McCoy registered the best bowling figures in T20I cricket for West Indies. Here are the top five on this list.

In Pallekele, the pace of Oshane Thomas blew the Lankan away. West Indies batted first and amassed 196/4 with Lendl Simmons scoring 67* off 51 balls. Thomas tore away Sri Lanka’s top order with his deadly spell. West Indies ended up winning by 25 runs.

The five-match T20I series between West Indies and England in 2022 was tied 2-2. In the decider, West Indies posted 179/4 with Kieron Pollard and Rovman Powell striking big. Akeal Hosein, who took 4 wickets in the game, provided the perfect start by dismissing Jason Roy in the first over. England battled through and they needed 20 runs off the last over. Holder took four wickets in four balls to seal the series win for his side.

Back in 2010, West Indies confronted Zimbabwe in the only T20I played in Port of Spain. The tall left-arm spinner Sulieman Benn wreaked havoc with his bowling figures being 4/6 in 4 overs. Sammy finished off the tail and claimed the five-for. However, Zimbabwe successfully defended 105 runs as West Indies collapsed to 79/7 in their 20 overs.

At Mirpur in 2018, West Indies batted first against Bangladesh in the series decider. Evin Lewis’ destructive 89 off 36 balls helped them post 190. The home side raced to 65 in just 4.2 overs but fell off the cliff from thereon. Keemo Paul was the chief destroyer with the miserly bowling figures of 5/15. West Indies secured a 50-run victory.

McCoy provided a dream start to West Indies as sent back Rohit Sharma on the first ball of the match. He then accounted for Suryakumar Yadav and later returned to swipe through the lower middle order. He took his last three wickets in his final over. India’s total of 138 proved inadequate.