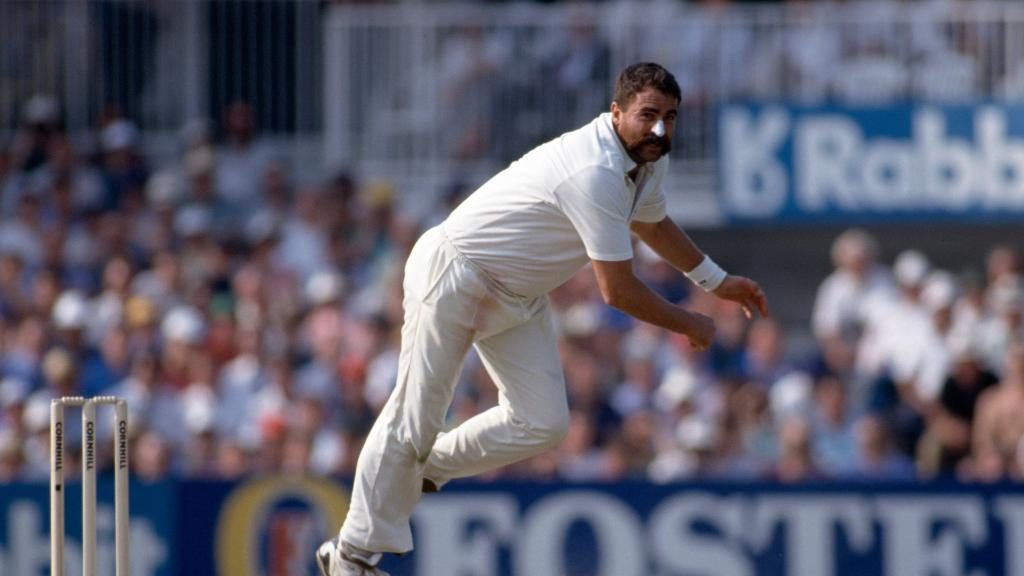 A hat-trick is considered valid only if a bowler picks three wickets in three successive balls he bowled inside a match. It could be spread across or even two innings of a match but does not qualify if wickets are taken in the Super Over. No-balls or wide balls will cost the bowler a hat-trick except in the unusual case of the batsman getting stumped on a wide. In such cases, the hat-trick takes place within two or fewer legitimate deliveries coming from a bowler.

To date, only one hat-trick in international cricket has taken place across three different overs which was none other than by Australia’s Merv Hughes. The incident took place on 5th December in the 1988 Perth Test against West Indies after the visitors took a 1-0 lead in the 5-match Test series. After being put in to bat, the West Indies team got a big total of 449 in the first innings. Their skipper Sir Viv Richards led the charge with a 150-ball 146 smashing as many as 102 runs through boundaries.

Merv Hughes finished with a 5-wicket haul as West Indies lost their last five wickets for 28 runs. Hughes got the wicket of Sir Curtly Ambrose on the last ball of the 122nd over of West Indies’ first-innings. He later got the better of Patrick Patterson on the first delivery of the 124th over to wrap up the innings. In reply, Australia made runs at almost four an over and declared at 395/8 to have a shot at West Indies openers before stumps on the 3rd day.

Hughes took the new ball for the Aussies and went up against the opener Gordon Greenidge. On the very first ball of the innings, Greenidge was trapped in front ensuring a hat-trick for the pacer which was spread across three different overs. Hughes went on to finish with as many as eight wickets in the innings but West Indies got 349/9 before declaring the innings on the final day morning. Australia, chasing a target of 404 to win, bundled out for just 234 runs and lost the game by 169 runs.