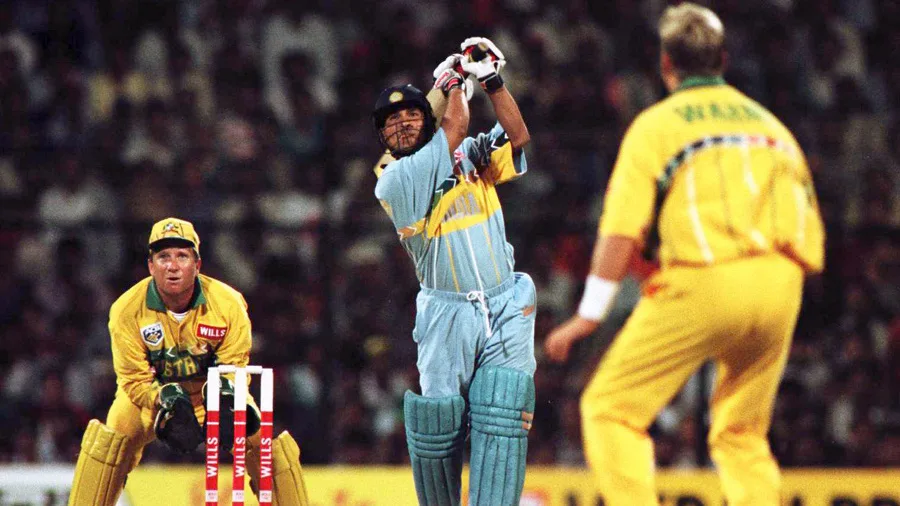 Sachin Tendulkar captained the Indian side only for a short period of time and during his tenure, one of the unforgettable games was against Australia in the 1996 Titan Cup. It was the third game in Bengaluru, and the visitors elected to bat first after winning the toss. On the back of a stunning century from Mark Taylor, Australia reached a respectable score of 215 for 7 in their 50 overs. Contributions from Steve Waugh and Michael Bevan helped while none of the other batters could get going.

For India in the bowling card, Venkatesh Prasad was the pick of the bowlers with 3 for 37. Chasing the moderate total, all that India needed was to not lose wickets early. Openers Tendulkar and Sujith Somasunder added 30 runs for the first wicket and the latter struggled for the most part of it.

Rahul Dravid, Mohammad Azharuddin and Sourav Ganguly were dismissed early while Ajay Jadeja and Tendulkar struck a crucial partnership for the fifth wicket. Tendulkar as usual, looked quite solid at the crease and he was happy to rotate the strike with the odd boundaries coming by. Jadeja was removed after an important 27 while Nayan Mongia provided good support for a while to the skipper.

However, India lost three wickets for just seven runs in a quick span and Steve Waugh picked up the big wicket of Tendulkar who had to leave after a terrific innings of 88. At 164 for 8, it looked like Australia sealed the game and it was only a matter of time till the Indian tailenders were cleaned up. But it wasn’t to be as the likes of Javagal Srinath and Anil Kumble from nowhere produced a gem of a partnership for the ninth wicket and it came at a good pace too.

In the end, the pair registered a 50-run partnership against a quality Australian bowling attack and managed to get India over the line by two wickets and seven balls remaining. Srinath remained unbeaten on 30 off 23 balls with two fours and a six while Kumble’s unbeaten 16 had a big part to play. Tendulkar won the player of the match and the game will be remembered for a spirited effort which led to a unexpected victory.