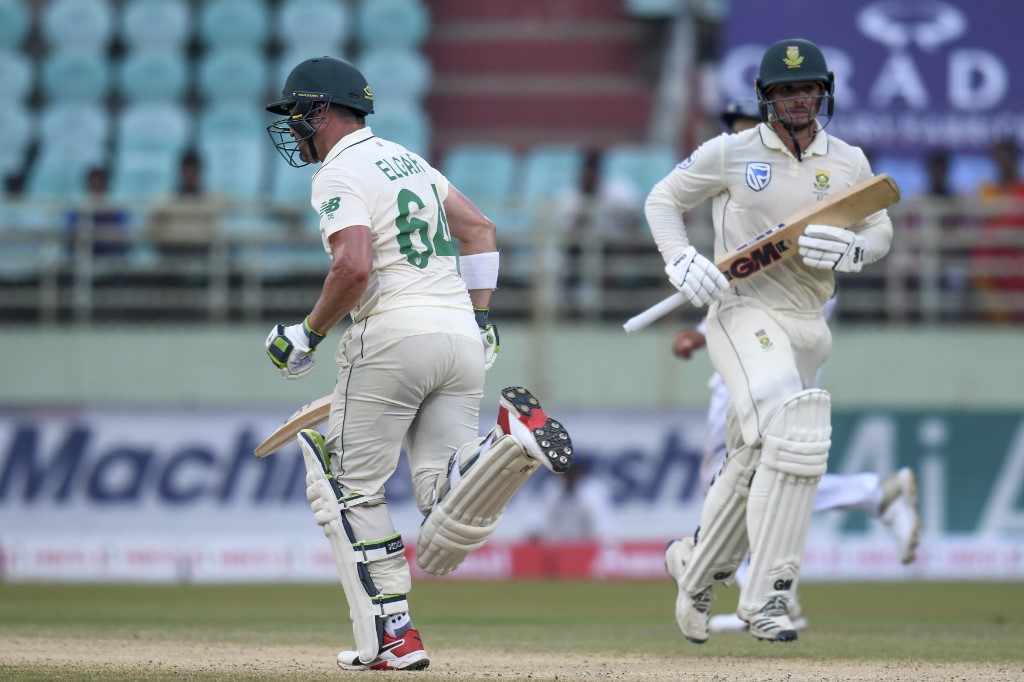 South African batsmen showed great character on the third day of the first Test at Vizag. Starting the day on 39/3, the visitors stitched two mammoth partnerships to keep themselves alive in the match. Dean Elgar was the principal contributor with his sterling knock of 160. Quinton de Kock scored a fast-paced century and du Plessis also helped with a fifty. The Indian bowlers recovered to an extent in the final session by taking major wickets. South Africa finished the day with the trail of 117 runs. India need two more wickets to end the first innings of Proteas.

Check out the full scorecard here

India enjoyed a positive start to the third day. South Africa under the pump at 39/3 on the previous day were looking to negate any more damage. Indian bowlers were vicious in the first hour of the day. The second ball of the day took an outside edge of Temba Bavuma’s bat and passed through the vacant slip cordon. There were a few close calls against Elgar as well. Ishant finally broke through by trapping Bavuma in front of the stumps. However, that remained India’s lone success in a long time.

Also read: From twin ducks to a Test double – The coming of age of Mayank Agarwal

South African captain Faf du Plessis had a disastrous record on Indian tracks but the batsman decided to set the record straight. He adopted an aggressive approach and started dealing in boundaries. With him freeing up, Elgar also dominated the Indian bowlers. There was an over from Jadeja where Elgar smashed two sixes and a four. The duo batted till the lunch as the visitors pocketed the first session.

Du Plessis celebrated his maiden fifty on the Indian shores but soon faltered against Ashwin as he handed a catch to Pujara at leg gully. His departure brought Quinton de Kock at the crease. The wicketkeeper not only carried on in the same vein as that of his skipper but batted at an even higher tempo. At the other end, Elgar brought up his first Test century in India with a six. The pair of Elgar and de Kock did not allow Ashwin-Jadeja to dictate the terms. Their incredible endurance at the crease forced Virat Kohli to experiment with part-time bowlers.

The partnership for the sixth wicket between Elgar and de Kock swelled to 164. The pair looked extremely comfortable at the crease and a wicket seemed distant on the horizon. Tired by his marathon knock of 160 runs, Elgar played a false shot off Jadeja as Cheteshwar Pujara latched on to a spectacular catch at deep square leg. This wicket was Jadeja’s 200th scalp in his 44th Test, making him the fastest left-arm bowler to reach the milestone.

Elgar’s fall allowed an opening for the Indian bowlers. De Kock struck boundaries to reach his Test ton but was forced to stay quiet afterwards. Ashwin foxed him with his variation and castled him on his personal score of 111. The off-spinner also made Philander edge a ball back on his stumps to complete his five-wicket haul. S Muthusamy and Keshav Maharaj survived torrid time in the fading light and remained unbeaten.