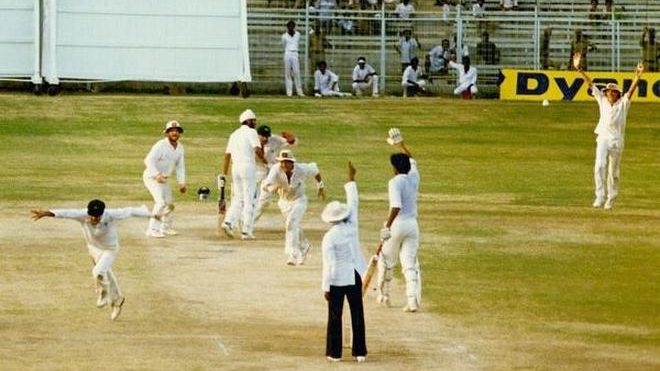 Australia have been a world-class side for decades and even though they have won all the major titles in world cricket, they have not been able to do well in India as far as Tests are concerned. Barring 1969 and 2004, the Aussies have struggled in India in the red-ball format.

Meanwhile, Australia did get a chance to etch their name in cricketing history during the 1986 tour and without further ado, learn more about the second tied Test match between India and the Aussies.

The tale of a tied Test match featuring India and Australia

The first Test match of 1986 that was played between India and Australia in Chennai was only the second Test to end in a tie after the famous Australia-West Indies encounter in 1960.

The visitors won the toss and elected to bat first and at one point, it seemed that they had completely batted India out of the contest scoring a mammoth 574/7 courtesy of 210 from Dean Jones and centuries from David Boon and skipper Allan Border.

The first innings total was indeed too much for the hosts, but India did not go down fighting as captain Kapil Dev’s fighting 119 helped them post 397 on the board. Thus, with a massive lead of 150, the Aussies looked to pile misery on the Indian team in the second innings and they did so by declaring their innings at 170/5 to set up a target of 348 runs.

Nonetheless, the Indian batters instead of playing defensively came out all guns blazing as Sunil Gavaskar scored a valiant 90 while Krishnamachari Srikkanth and Mohinder Amarnath contributed with 39 and 51 respectively and the fight was on.

The hosts only needed 18 more runs to register a famous win in the remaining five overs with four wickets left and tragedy struck just when they were at the cusp of victory as they lost the wickets of Chetan Sharma and Kiran More.

There was a lot of tension in the Indian camp, but Ravi Shastri took care of the proceedings in a calm and composed manner as he brought India close to the target. Shastri toiled manfully from his end to ensure that the scores were level with three balls left and when he took a single, the onus was on the last man Maninder Singh to ensure that he got the job done. Unfortunately for the Indians, that was not to be as he was caught plumb in front of the wicket as India were all out for 347.