On this day in 2019: New Zealand overcome Carlos Brathwaite’s heroics to secure a thriller 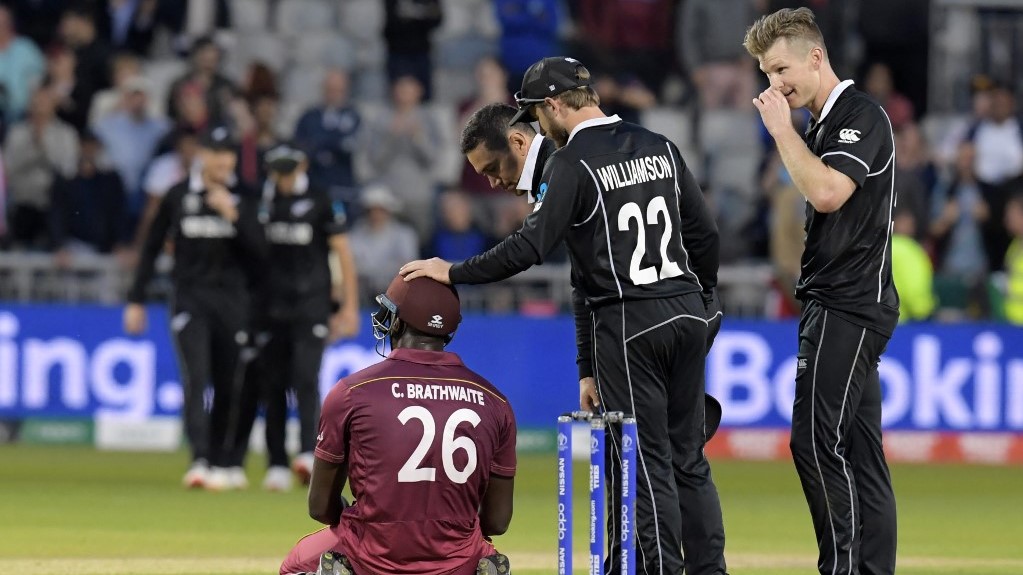 Carlos Brathwaite already has a miraculous finish on his name. And, on 22nd June 2019, Brathwaite almost pulled off another miraculous victory over New Zealand in a humdinger of a World Cup clash at Manchester. But in the end, tragedy struck, as the West Indian side went down to the Kiwis by a margin of 5 runs, in spite of Brathwaite’s brilliance with the willow. Let us delve deep and unravel this classic World Cup contest between the West Indies and the Kiwis.

West Indies won the toss and decided to field first. The Black Caps got off to a horrible start and were reduced to 7/2 within the 1st over itself, as both the Kiwi openers, Martin Guptill and Colin Munro were dismissed without troubling the scorers. But then, the experienced duo of Kane Williamson and Ross Taylor came together and stitched a match-winning partnership of 160 runs for the 3rd wicket.

While Taylor scored 69, Williamson played arguably the greatest World Cup knock of his career, and scored a masterly 148, as New Zealand posted a challenging total of 291/8 on the board. Sheldon Cottrell picked up 4 wickets for the ‘Men in Maroon’ with the ball in hand.

For the West Indies, Chris Gayle played an excellent innings at the top of the order. The batting legend scored 87 runs and scored his runs at a strike rate of 103.57. And, when Gayle fell off the last ball of the 24th over, the West Indian scorecard read 152/5, and the match was slipping away from the West Indies.

And, that was when Brathwaite played a blinder of an innings. The right-hander decimated the Kiwi bowling attack and scored a belligerent 101. But then, with West Indies just 6 runs short of victory and with 1 wicket in hand, Brathwaite perished. James Neesham bowled a short delivery, and Brathwaite went for the pull. But then, he did not connect the ball as well as he would have liked to, and Trent Boult completed a smart catch in the deep. And, the West Indies lost the match by a slender margin of just 5 runs.

For New Zealand, left-arm pacer Trent Boult was the pick of the bowlers. Boult bowled 10 overs, gave away 30 runs and also scalped 4 wickets as well. And, for his magical innings that allowed the Black Caps to post a win, Kane Williamson was awarded the Player of the Match award.

100MB @100MasterBlastr
49 minutes ago
Team India have slipped to the 4th position after the penalty for slow over rate.