On this day: Vidarbha create history with their maiden Ranji Trophy victory 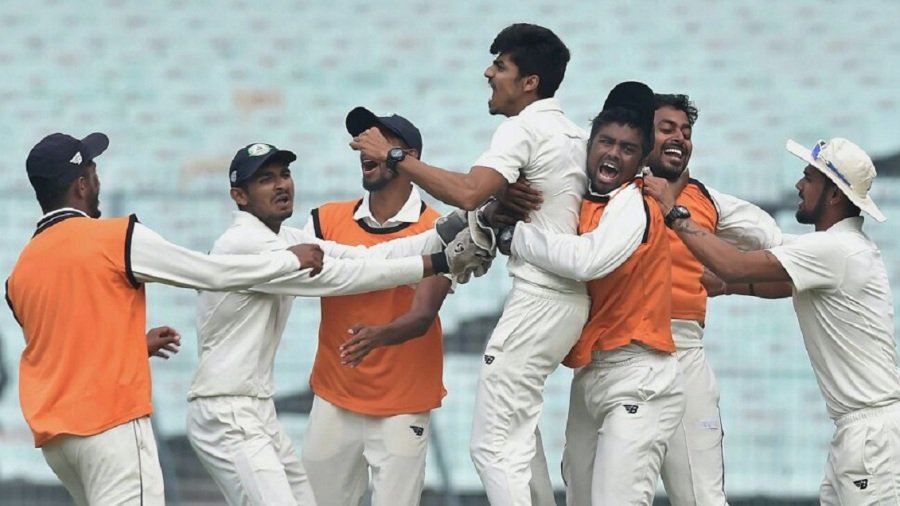 Vidarbha claimed their maiden Ranji Trophy after beating Delhi by nine wickets in the final of the country’s premier domestic tournament, on this day in 2017. It took Vidarbha 61 seasons to win their maiden title after they appeared in the tournament for the first time in 1957-58 and played 260 matches before coming into the 2017-season.

Opting to field, Vidarbha bowled out Delhi for 295 – which included a sensational 145 from Dhruv Shorey – in the first innings, with Rajneesh Gurbani picking up six wickets. In reply, Vidarbha notched up a mammoth 547 all out, courtesy of some solid and classy innings from Faiz Fazal (67) and Wasim Jaffer (78) before Akshay Wadkar struck his maiden century in first-class cricket (133). Following him came some contributions from the lower-order, where half-centuries from Aditya Sarwate (79) and Siddhesh Neral (74) swelled up the score to 547.

Young pacer Navdeep Saini was the most successful bowler for Delhi, returning with figures of 5 for 135 after bowling a marathon 36.3 overs. Trailing by 252 runs in their second innings, Delhi were all out for 280. They lost opener Kunal Chandela with just 32 runs on the board and a bigger blow was dealt when the side’s most experienced campaigner, Gautam Gambhir, was adjudged out lbw off Gurbani in a debatable decision. He looked in good touch during his quick 36 off 37 balls and could have helped Delhi had he stayed longer.

The second session saw the Shorey-Rana duo playing freely, hitting drives and flicks at ease. However, Delhi lost Shorey (62) as the score reached 164, as the batsman was given a reprieve by Wasim Jaffer in the first slip off Aditya Sarwate. Rana (64) followed suit as he nicked one from Gurbani to Wadkar. While four of their batsmen fell to Akshay Wakhare, Aditya Sarwate and Rajneesh Gurbani bagged three and two, respectively.

Vidarbha celebrate after clinching the @paytm #RanjiTrophy 2017-18 with a nine-wicket win over Delhi #Final #DELvVID pic.twitter.com/UEes6Xb7YS

Much like the first-innings, Gurbani bowled his heart out and swung the new ball impressively. Himmat Singh, who piled up a half-century in the first-innings, was cleaned up by spinner Akshay Wakhare before he could even open his account. And then came a reckless shot by Rishabh Pant (32), an attempted heave off Siddhesh Neral leading to his dismissal as Delhi ran out of batting options. Chasing a target of just 29, Vidarbha completed the task with the loss of skipper Faiz Fazal’s wicket.