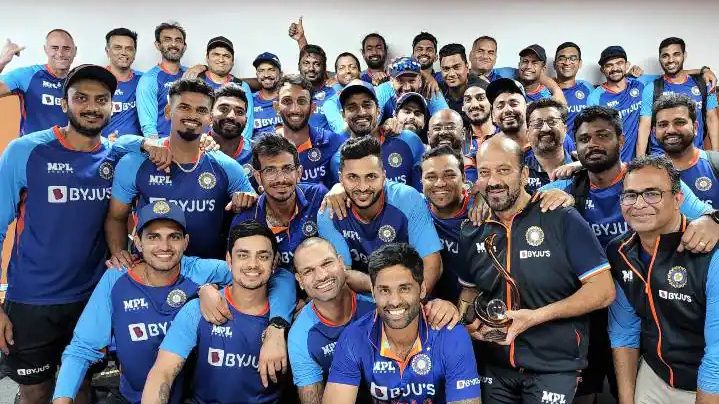 Team India completed a historic ODI series triumph against the West Indies on July 27, Wednesday, as they whitewashed the Windies for the first time ever on Caribbean soil. This was also India’s second successive whitewash over the opposition overall in the format. Following the victory in Port of Spain, the camaraderie in the Indian changing room looked as good as ever.

India head coach Rahul Dravid heaped praise on the “young” Indian team for their performance over the three games and for their level of professionalism. He said that it was a great sign to see the team end on the right side of the tight games. He also congratulated the skipper, Shikhar Dhawan, and the rest of the team.

BCCI shared a video of the head coach and the skipper addressing the team on Twitter. “Really good series, well done. We came here with a really young team. A lot of the guys who played in the England series didn’t play here. And it was really a young team,” said Dravid.

‘You guys are gonna go a long way,’ – Shikhar Dhawan to the team

“The way you guys have responded, the way you guys played in three games, the level of professionalism… couple of tight games, we discussed those, to get on the right side of those high-pressure games with some terrific performances under pressure was a really great sign for a very young team,” Dravid added.

Dhawan also thanked all the team members and the support staff for their efforts and lauded his teammates for their performances on the field. He believes that they would grow bigger than what they are today and that they have a long way ahead.

“The batting unit as well as the bowling unit, you guys did amazing. You guys were young, you guys were efficient,” said Dhawan. “You will be much bigger than what you are today. You guys have already started taking those steps. I’m sure you guys are gonna go a long way.”

The interim India skipper also urged everybody to stand up and gather for a photo. “Before I end this talk, I would like everyone to stand up [for a photo]. I will say ‘who are we’. And you all shout, ‘we are champions’,” the 36-year-old expressed.

100MB @100MasterBlastr
16 hours ago
The beginning of something special...
A 💯 to remember...
First of the hundred hundreds from @sachin_rt! ❤️ https://t.co/vp1kDcW38s
View on Twitter