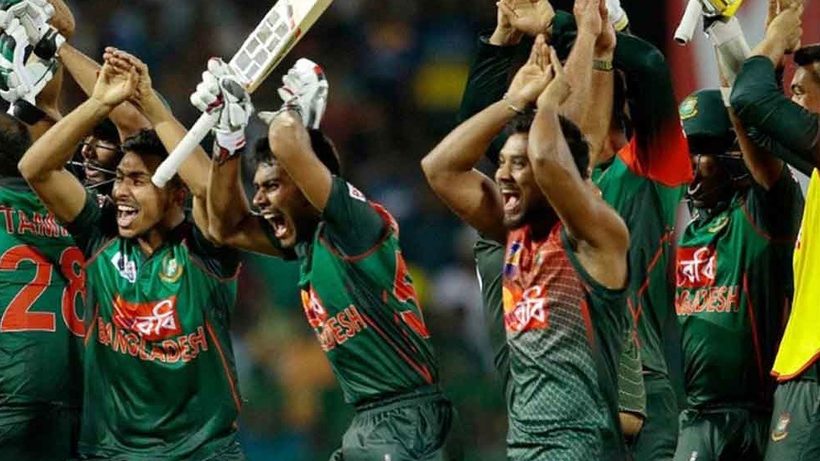 With the commencement of T20 cricket, people have started finding the sport even more enthralling as they expect a jam-packed action on each ball. Adding to that, T20 leagues around the world such as BBL, CPL, PSL and especially the IPL, have increased the entertainment value exponentially.

As players enjoy their game in different parts of the world, it is natural that there will subsequently be trademark celebrations performed by certain players. This is a way of showing how much the sport means to them and they will put their all to excel in it.

With the emerging crop of players being more inclined towards an open display of their feelings on the field, this trend is not going to die off soon. This is probably for the best as it helps the fans have a deep connection with the players as they think that these players aren’t just playing for the sake of it but genuinely love the game.

Here is a look at five of the strangest celebrations in cricket:

A cricketer whose one-off celebration has been the highlight of his career, Tinashe Panyangara‘s celebration tickled fans across the globe. This happened during the ICC 2015 World Cup when Zimbabwe were playing against South Africa at Hamilton. Zimbabwe was desperate for a wicket and Panyangara picked the wicket of the mighty Hashim Amla at the very moment.

Panyangara was so ecstatic that went down to the ground and celebrated it by crawling, which also looked like a singing bass fish. This celebration is popularly termed as ‘The Big Mouth Billy Bass’ celebration. Panyangara may not be remembered by everyone, but this celebration will be fresh in the minds of many fans across the globe.

Talking about weird celebrations, S Sreesanth is one name in Indian cricket that will feature in such lists every time. The incident occurred way back in 2007 at Johannesburg when India was touring South Africa. It was the first Test match of the series and India was on top which didn’t go well with a Protea pacer, Andre Nel.

When talking about what led to that celebration, Sreesanth said “Andre Nel was talking a lot. He kept saying that Indians don’t have a heart and that they (South Africa) were the better team.”

And guess what happened after those sledges? Sreesanth stepped out, swung his bat as hard as he could and the ball went for a six. He started swinging the bat at Andre Nel so as to show his sheer dominance at him. Later, even Sreesanth termed this moment as ‘momentary madness’.

One of the best T20 captains ever, Daren Sammy is the only player to win two T20 World Cups as captain. Along with his cricketing skills, he had a unique celebration way back in 2013. With a pacifier around his neck like a pendant, he sucked on it every time he sent a batsman packing. He simultaneously acted like he was putting a baby to sleep.

When asked about the celebration, he said, “I just had a baby girl back home and I was in my room thinking about how I would celebrate. I saw my baby girl suck on the pacifier and then I said to myself, ‘OH, I will get my pacifier out after a wicket or a landmark’ and that’s how this style of celebrating came about.”

Coming from the part of the world which has been producing quality spinners for half a decade or so, Qais Ahmad has impressed quite a few with his leg-spin bowling. However, his celebration has fixed a tiny spot in the minds of fans who witnessed it. The first glimpse was during CPL 2018 when he was playing for the St Lucia Stars, now Kings against the Barbados Tridents, now Royals. After picking a wicket, the youngster ran a bit and then flipped himself, acrobatically.

Ever seen each member of a team performing a celebration simultaneously together? That’s exactly how the Bangladeshi celebrated by showcasing the Nagin Dance to fans across the world. The incident took place in the 6th match of the Nidahas Trophy series which was played between Bangladesh and Sri Lanka. It was a virtual semi-final for both the teams as the winner would proceed to meet India in the finals.

After a see-saw of a game, Bangladesh managed to win on the penultimate ball. Soon, after the match in the heat of the moment, the Bangladesh team gathered in the middle of the ground to celebrate the victory performing the ‘Nagin’ dance.

100MB @100MasterBlastr
53 minutes ago
Tilak Varma had a phenomenal season and that earned him a place in this list. 💥