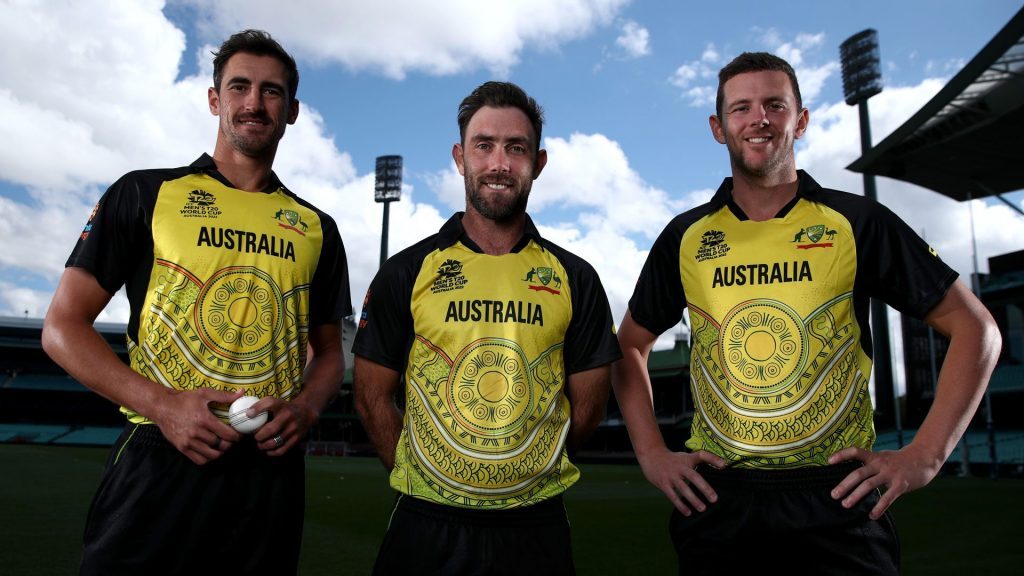 The Australian cricket team will don an Indigenous-themed jersey for this year’s T20 World Cup, marking the first time they have done so at a major international competition. The Aaron Finch-led Men in Yellow will be on the hunt to defend their championship title and they will don a kit that has black sleeves and a gradient of green and gold on the playing top’s trunk.

The black trousers and black cap will have the colours of the Aboriginal and Torres Strait Islander flags on the brim, while the long-sleeved version will have the gold and green artwork extended onto the sleeves of the top. The uniform was created by Aunty Fiona Clarke and Courtney Hagen in partnership with Asics and the two have previously collaborated on other Indigenous Australian clothing designs as well.

The Walkabout Wickets artwork that has evolved into a dominant theme is once again centered on the front of the shirt, as it has been in prior designs. The artist of Walkabout Wickets is Clarke, a Kirrae Whurrong woman and great great granddaughter of James ‘Mosquito’ Couzens, who played for the Aboriginal XI in a historic match at the MCG in 1866 and traveled to England in 1868 as part of the first Australian sports team to play outside of the country.

Prior to the 2016 Boxing Day Test, Clarke designed the artwork to honour the 150th anniversary of the 1866 game. Ever since, it has been shown on the collar of the Test kit. Connection is a key concept for the kit, as it pays homage to the established, budding, and former First Nations cricketers.

The eye-catching new T20 World Cup uniform comes after Australia won the 2021 championship in Dubai while sporting two different uniforms, marking the first time an Australian side was required to prepare an alternative. When the men’s tournament was first set to take place in late 2020, Australia’s men had intended to use a black, gold, and green outfit that was a replica of the uniform worn by the women’s squad that won their T20 World Cup in 2020.

Australia’s hunt to defend their title

As for Australia, they have named a strong 15-member squad for the marquee event. While Aaron Finch will be leading the side, Pat Cummins will be his deputy. One of the biggest attractions on the Australian side, apart from their kits, will be the Singapore-born power-hitter Tim David, who was named in the main roaster by Cricket Australia.