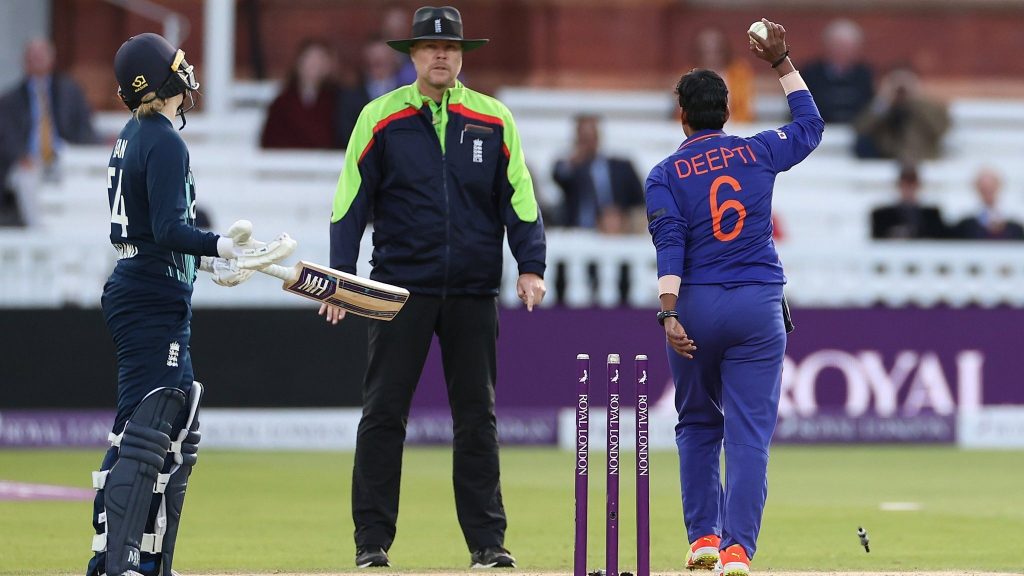 Deepti Sharma ran out Charlotte Dean in the third and final WODI between India and England as the visitors ended up winning the contest by 16 runs and thereby, register a 3-0 whitewash. Meanwhile, the English cricket fans as well as the current and former cricketers including the likes of Michael Vaughan, Nasser Hussain and Stuart Broad were against this act of running the batter at the non-striker out.

All the confusion was finally laid to rest when Marylebone Cricket Club (MCC) finally intervened and released an official statement regarding the run out rule. It is to be noted that such kind of a dismissal where the bowler dislodges the bail at the non-strikers’ end when he or she sees the batter walking out of the crease is considered as a legal form of run out.

Taking to their official social media handles, the MCC posted a statement regarding what the rules are after spin all-rounder Deepti Sharma’s mode of run out was questioned by some.

“This change will formally come into effect from 1 October 2022. This was done to clarify this matter and to place an onus on batters to ensure that they do not leave the crease at the non-striker’s end, prior to a bowler releasing the ball. The Law is clear, as it needs to be for all umpires to be able to easily interpret throughout all levels of the game and at all moments in the game. Cricket is a broad church and the spirit by which it is played is no different. As custodians of the Spirit of Cricket, MCC appreciates its application is interpreted differently across the globe. Respectful debate is healthy and should continue, as where one person sees the bowler as breaching the Spirit in such examples, another will point at the non-striker gaining an unfair advantage by leaving their ground early. MCC’s message to non-strikers continues to be to remain in their ground until they have seen the ball leave the bowler’s hand. Then dismissals, such as the one seen yesterday, cannot happen. Whilst yesterday was indeed an unusual end to an exciting match, it was properly officiated and should not be considered as anything more.”

Thus, the MCC rule clearly states that even a batter standing at the non-strikers’ end should not leave the crease early until they see the ball being released from a bowler’s hand or else it will result in an unfair advantage for the batter which was exactly applicable in Dean’s case.

Meanwhile, there were many images doing rounds on social media which speculated that Charlotte Dean was leaving her crease throughout the innings in this manner even before the bowler had delivered the ball.