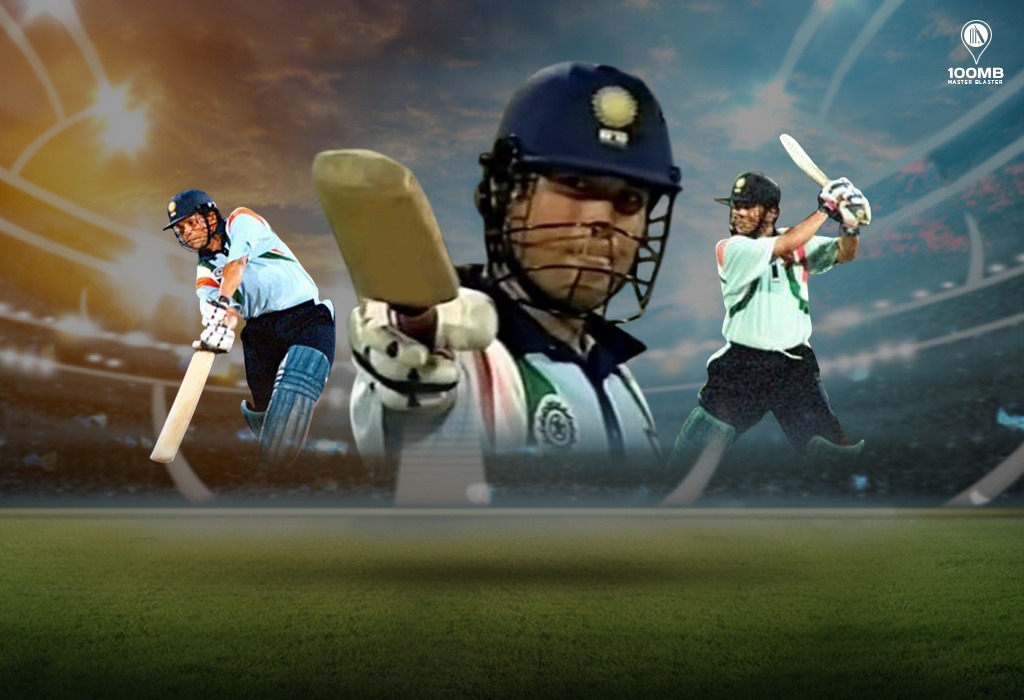 First, there was nature’s fury, then there was Sachin Tendulkar’s. Australia couldn’t escape either.

22nd April 1998. If you build a time machine, transport yourself to this date with Sharjah Stadium, UAE as the location. On this day, Sachin Tendulkar played arguably the most popular innings in ODI cricket. He took on the Australian cricket empire and brought them down to their knees. He bludgeoned his way to 143 runs that night – one to remember for the ages.

The ’90s was the era of ODI triangular series. The year 1998 witnessed as many as nine triangular tournaments. These drew tremendous crowds and were hugely successful. Coming into this tournament, Australia were the winners of the triangular series which consisted of Zimbabwe and hosts India. Australia and India then travelled to the UAE where New Zealand joined them for another tri-series.

Coming into this series, Tendulkar had scored 387 runs in 10 matches with only one century. By the end of the year, he would add 1,507 runs with eight more hundreds. And it all started on that one stormy night at Sharjah.

The Build-Up to Sachin Tendulkar’s masterclass

Australia had won every game in the group stage up until they faced India while India and New Zealand had a win against each other. When India confronted the Kangaroos in the final group game, they had to maintain a specific net run rate for harbouring the hopes of making it to the final. This match was on 22nd April 1998.

Steve Waugh won the toss and chose to bat first. His brother, Mark justified the decision with a solid 81 at the top. Michael Bevan, batting at number five, scored a century and carried the score past 280. Australia eventually finished with 284/7 on the board – the highest total of the tournament.

Listen to the Master as he recounts the wild night:

The Indian openers, Tendulkar and Sourav Ganguly, began the chase cautiously. After 5.4 overs, the score was only 16. And then the Master Blaster changed gears.

The five-man bowling attack of Australia consisted of Michael Kasprowicz, Damien Fleming, Shane Warne, Tom Moody and Steve Waugh. Their top three were going to test Tendulkar severely but the Master Blaster had a reply for everyone. Kasprowicz was first up. Tendulkar pulled him for two consecutive sixes. The show had just begun.

Mixing risk with field awareness, the Indian maestro continued in his own tune. There were cracking leg glances and delicate backfoot square drives. In the 21st over, he slapped Shane Warne for a cover drive and inched toward his fifty. When he brought up his half-century, Tony Greig on the commentary said, “It looks like today Tendulkar has set himself for a hundred.”

The Arrival of the storm

India steadied themselves in the middle overs. With 21 overs remaining, a sandstorm hit Sharjah. The field had to be vacated as winds blew in full speed. When the play resumed, four overs of play had been lost, and India’s target was reduced by nine runs.

The alterations spiked up the required run-rate. It was time for Tendulkar to hit the top gear. He started his own storm in the middle, a run-storm. This time, the Aussies could not vacate the field. They were mere spectators of a classic.

There was a straight six off Kasprowicz, there was a forced pull and many other shots as Tendulkar advanced towards his hundred. When he brought up his 14th ODI ton, India’s score was 194.

The qualification target was run-a-ball from this stage, but the winning target was too high. While the rest of the nation craved qualification, Tendulkar eyed nothing less than victory. With six overs to go, India needed 37 to qualify and 70 for a win. Tendulkar launched an assault that made the Sharjah spectators “dance in the aisles.”

The 42nd over was the peak. A straight six on the first ball prompted Greig to utter his famous words, “Whaadaplaaya.” Tendulkar clinched the qualification in the next over. On the very next ball of qualifying, a six over covers greeted Damien Fleming. And then it ended.

The last ball of the 43rd over was short of length from Fleming. Apparently, Tendulkar missed it altogether and the Australians were jumping with joy. The umpire at the striker’s end did not raise his finger but the Master was seen walking back to the pavilion. It was later revealed that the square-leg umpire had given him out.

Sachin Tendulkar’s dream innings ended in an anti-climax. He was dismissed for his highest ODI score at that point, 143. The knock that lasted 131 balls included nine fours and five sixes. India qualified for the final but lost the match by 26 runs. Tendulkar’s knock ended in a losing effort.

Two days later, against the same opposition and on the same ground, Sachin ensured that another innings didn’t end in a losing cause.

100MB @100MasterBlastr
54 minutes ago
Tilak Varma had a phenomenal season and that earned him a place in this list. 💥