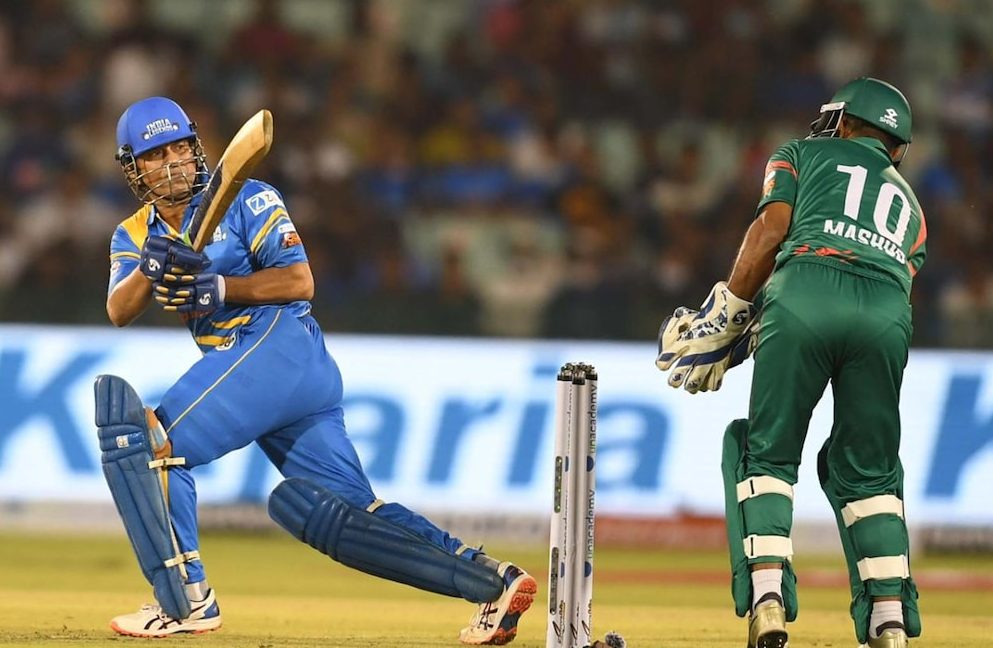 It has been almost a decade since the Master Blaster Sachin Tendulkar bid adieu to international cricket. However, the Little Master does make his presence felt in charity matches and he is currently representing and captaining the India Legends in the ongoing edition of the Road Safety World Series.

It is always a pleasure to watch Sachin Tendulkar bat and he left no stone unturned in entertaining the passionate cricket fans and viewers in the match between the India Legends and the New Zealand Legend that is being played at the Holkar Cricket Stadium in Indore.

The New Zealand Legends skipper Ross Taylor won the toss and elected to bowl first. The decision seemed to be spot on when the Kiwis dismissed Naman Ojha for 18 just when he looked to provide a brisk start for the India Legends.

Sachin was then joined by his former India teammate Suresh Raina in the middle and together they carried out the rescue act. Nonetheless, it was one of the Master Blaster’s spectacular cricketing shots that kept the fans on their feet.

In the first over of the match, the batting maestro unleashed his onslaught on former New Zealand pacer Kyle Mills by hitting an amazing backfoot cover drive which also happened to be his first four. He then played a pull shot in the very next over that was bowled by the pace icon Shane Bond and looked in fine touch.

However, what really stood out was Tendulkar’s outstanding scoop shot off Mills’ and just when it looked like he was set for a big knock, rain ended up playing spoilsport as the India Legends scorecard read 49/1 after 5.5 overs. The players and the match officials were asked to leave the field and the match eventually was abandoned.