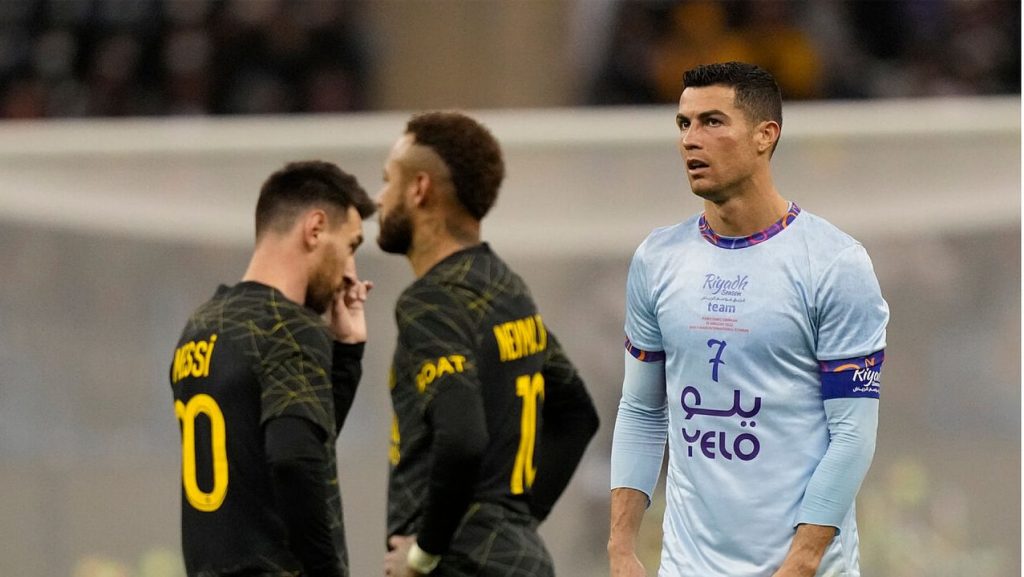 In what would have been his final matchup with his fierce adversary Lionel Messi, Cristiano Ronaldo scored twice, but his team, a combined XI of Saudi Arabian teams Al-Nassr and Al Hilal, bowed to Paris St. Germain 5-4 on Thursday.

Ronaldo, a former Real Madrid colleague of Keylor Navas, collided with the PSG goalkeeper and injured his cheek but the Portuguese football legend still managed to score two goals. Virat Kohli, former captain of the Indian cricket team, praised Ronaldo for his performance and slammed “football experts” who had recently criticized him.

In an interview with British television host Piers Morgan, Ronaldo lambasted the team and manager Erik Ten Hag and sparked strong reactions to the way he left Manchester United. Even though he had said in the interview that he planned to keep playing in Europe, he eventually signed with the Al-Nassr team in Saudi Arabia.

After Ronaldo’s performance, Kohli took to his Instagram to share a picture of the football great and wrote:

“Still doing it at the highest level at 38. The football experts sitting and criticizing him every week for attention are conveniently quiet now that he’s put in this kind of performance against one of the top clubs in the world. And he was apparently finished.”

The fact that Kohli admires Ronaldo has never been a secret to anybody. The former captain of India has been compared to the legendary Portuguese footballer due to his commitment to fitness and status as one of the best players of his generation.

Kohli is currently in great form with the bat. In the past two months, that is December 2022 and January 2023, Kohli managed to notch up three ODI centuries. After going through a lean patch in his career, the 34-year-old ended a three-year-long break of an ODI century and marked his return in style. He is currently a part of the Indian squad facing New Zealand at home in a three-match ODI series. India have won the first game and are currently leading the series 1-0.