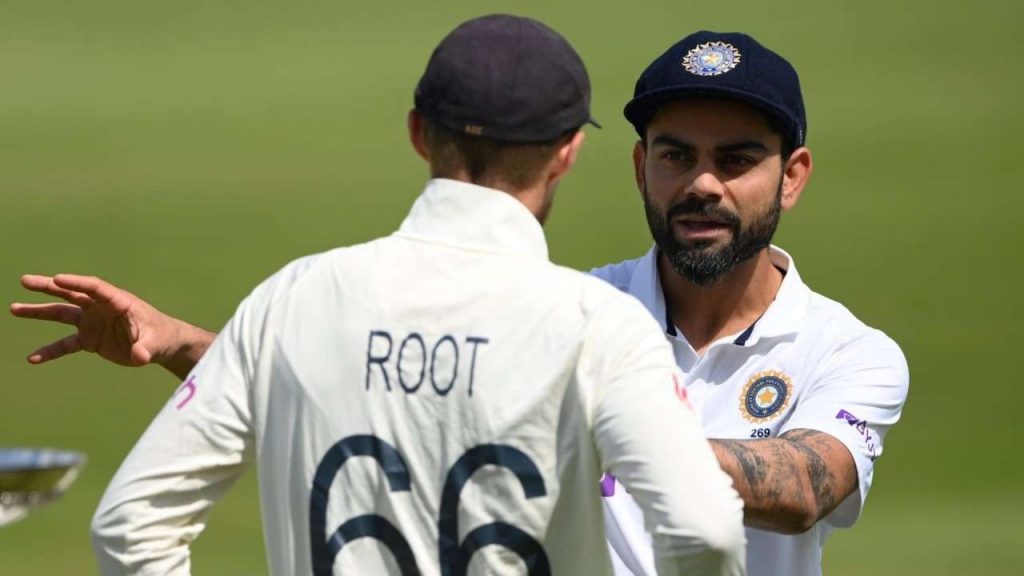 As is customary, Virat Kohli received the greatest applause when he entered the field to bat at Grace Road against Leicestershire CCC in the ongoing warm-up match before India’s postponed fifth Test against England. He held his position for a good deal of time while taking the game slowly, but what grabbed eyeballs was his attempt to balance his bat, seemingly like Joe Root.

During the fourth and final innings of England’s first Test match against New Zealand, Root managed to make his bat appear to stand on its own at the non-end striker’s for a brief moment. On Thursday, Kohli appeared to be attempting to accomplish the same while positioned at the non-striker’s end. But the bat immediately tilted towards him once he pulled his hand off, unlike what happened with Root.

Root’s trick occurred as he was putting on a masterful performance in the first Test’s fourth innings, finishing the match undefeated on 115 and guiding England to victory. Root garnered a lot of attention not just for that trick, but also for his unbeaten knock that helped his side bounce back to winning ways from their rough patch.

Terms like magician were previously used to describe players like Kohli, Kane Williamson, and Steve Smith, as all three have achieved laurels in the game when they used to score Test centuries for pleasure. The three superstars, though, have struggled in the last two years, and in that time, Root has surpassed Williamson to tie the record with Kohli and Smith for most Test hundreds among active cricketers.

Kohli’s last century came back in November 2019 and the former India skipper has failed to reach the three-figure mark since then. Meanwhile, the cautious, hesitant attitude that caused England to trail by 2-1 in the five-match Test series, before the last match was called off, can’t be seen in the team anymore. Instead, the English team is achieving new heights under new skipper Ben Stokes and new red-ball head coach Brendon McCullum.

Every plan seems to go in England’s favour, as the team was able to defeat the current World Test Champions New Zealand in the first two Test matches to clinch the three-match series even before the final game. India will be praying for Kohli to rediscover his mojo and put up a worthy and notable performance against England when the two teams clash at Edgbaston on July 1.