VVS Laxman catches up with Rahul Dravid during IPL 2022 match 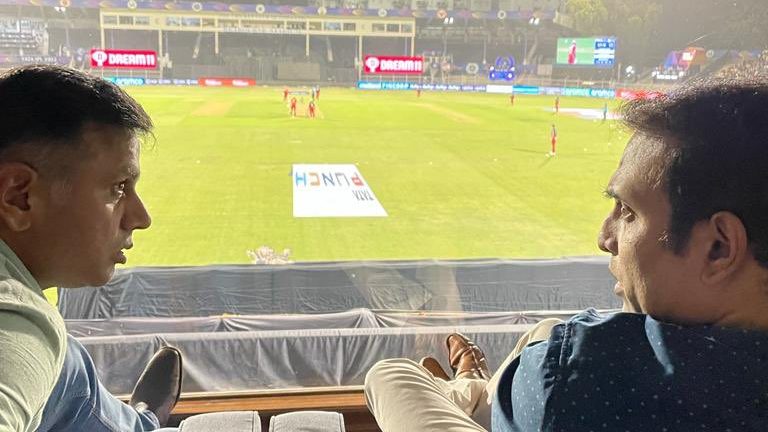 Two of the finest batters to have served the Indian cricket team, Rahul Dravid and VVS Laxman caught up with each other during the Indian Premier League (IPL) 2022 match between Royal Challengers Bangalore and Punjab Kings. While stakes were incredibly high in the game, the two former cricketers were enjoying their time in the stands. Laxman took to Instagram and shared a picture of his meet-up with Dravid.

It must be noted that both Laxman and Dravid retired from international cricket in 2012 but continue to serve the national team. While Dravid is the men’s team’s head coach, Laxman is the chief of the National Cricket Academy. The duo, who have played a lot together, are also known to share a great bond and their camaraderie was evident in Laxman’s post.

VVS Laxman shared the picture with a cheeky caption

Coming to the game, Punjab Kings put up a clinical performance and recorded a 54-run win at the Brabourne Stadium in Mumbai. The Kings posted 209/9 while batting first thanks to quickfire half-centuries from England batters Jonny Bairstow and Liam Livingstone. The score might have been even more colossal had Harshal Patel not pulled things back towards the end with a four-wicket haul.

Meanwhile, RCB lost wickets at regular intervals and couldn’t even come close to chasing the big total. The Faf du Plessis-led side was eventually restricted to 155/9, losing the contest by a fair margin. Meanwhile, this outcome has made the playoff equations more complicated and only time would tell what the final points table would look like.

RCB now have just one league-stage match left and they must defeat the high-flying Gujarat Titans to stay in the race. On the other hand, PBKS now also have equal chances of qualifying for the playoffs as they must win their remaining two games alongside keeping an eye on the net run rate.