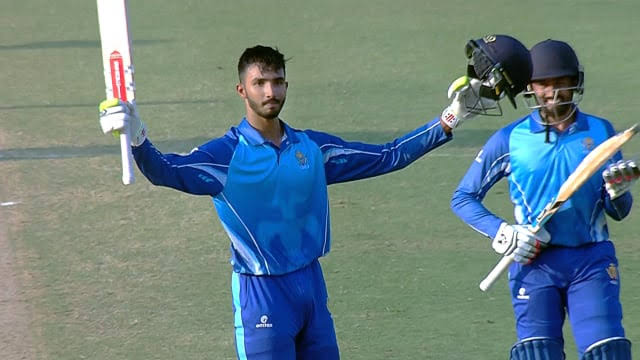 The Vijay Hazare Trophy 2022 edition started a few days. Over the years, there have been quite a few memorable games and it does not get better than chasing down big scores. It gives a massive boost to the whole team while the performances are also taken into account by the selectors. On that note, here are the top three highest successful chases in Vijay Hazare Trophy this season:

Services and Puducherry played a thrilling encounter in Ranchi in the Vijay Hazare Trophy season 2022 and it was a game to remember for the Puducherry side. Services posted 302 for 6 in their 50 overs after losing the toss and Puducherry managed to chase it with two overs left and five wickets in hand. Paras Dogra’s 129 run-knock helped massively while he got much-needed support from KB Arun Karthick.

Hyderabad produced one of the remarkable run-chases against Saurashtra in the 2022 season and the way they eased to the total showed the amount of confidence the unit had in it. After losing the toss, Saurashtra posted 312 for 9 on the board with Harvik Desai scoring a magnificent century. In reply, Hyderabad chased down the score with seven balls left and five wickets in hand on the back of Tanmay Agarwal’s century and Rohit Rayudu playing a big knock at the top.

Madhya Pradesh and Jammu and Kashmir played a humdinger of a game and the match went all down into the wire to decide the winner at the DY Patil Stadium in the 2022 Vijay Hazare Trophy season. The Madhya Pradesh notched up 342 for 9 in their 50 overs after losing the toss, thanks to a superlative century from Yash Dubey. In reply, Jammu and Kashmir did the unthinkable by chasing down the score with four balls left and two wickets in hand, against a bowling attack that had Avesh Khan and Kuldeep Sen.