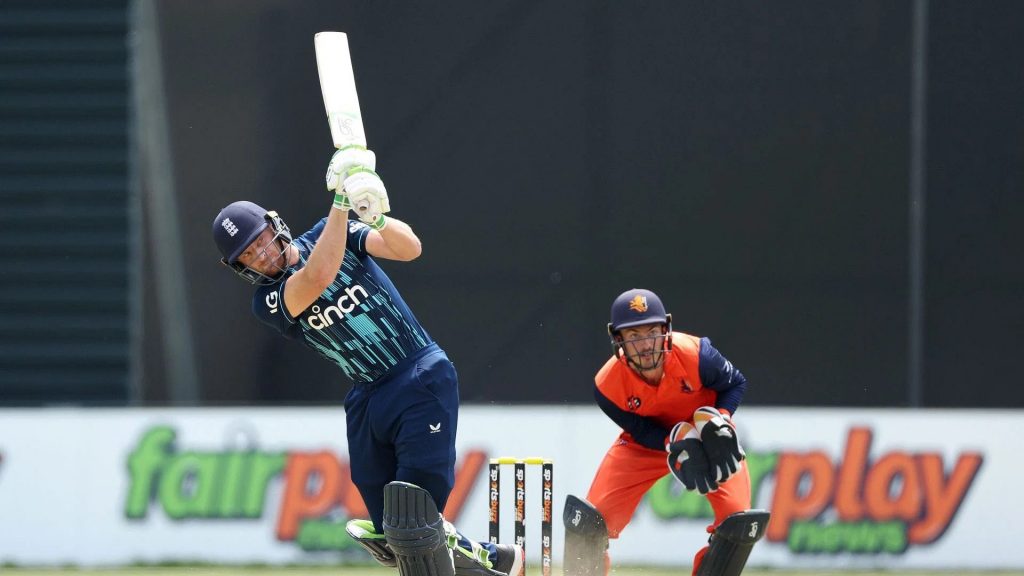 On Wednesday (June 22), England claimed a 3-0 ODI series victory over the Netherlands by defeating the hosts by eight wickets. The Three Lions demonstrated their batting dominance in each of the three matches, which were all anticipated to be one-sided. Meanwhile, stand-in captain Jos Buttler’s massive six off a double-bounce ball during the last game in Amstelveen interestingly grabbed eyeballs.

It happened during the 29th over when Buttler was facing Paul van Meekeren’s delivery. The ball had taken two bounces, the second of which had landed outside the pitch on the leg side. Buttler ran after the ball, whacked it in the direction of the leg side, and cleared the boundary. Apart from this six, Buttler smashed two more in the same over.

Meanwhile, the series was a memorable outing for England. With three batters hitting hundreds in the first game of the series, the English team broke the previous record of the highest team total (498) in ODIs. Jos Buttler was the top scorer in the series opener with an unbeaten 70-ball 162 runs. In the final game, Buttler responded with an undefeated 86 off 64 balls after completing the 245-run chase in the 31st over.

Buttler and Phil Salt finished the series as the joint-highest run-scorers as the former took the Player of the Series title. England now lead the ICC Cricket World Cup Super League standings with 125 points after their eight-wicket victory. With a perfect score, England have surpassed Afghanistan and Bangladesh to take the top spot on the table, where they were ranked third at the beginning of the series with 95 points.

Speaking of the game, England were a dominant force in the series and the players made it very clear during the first game itself. In the third match, David Willey worked the magic with the ball and helped his side restrict the hosts to a low total of 244 runs. In the 8.2 overs that he bowled in his spell, he managed to scalp four wickets, of which the most crucial one was of the opener Vikramjit Singh.

England openers Jason Roy and Philip Salt were off to a terrific start as the two added 85 runs for the opening partnership before the latter walked off. While Dawid Malan was sent off for a duck, Buttler joined Roy to wreak havoc on the field. As the Netherlands bowlers struggled to take them down, the duo added 163 runs for the third wicket and finished off the game in style as Roy completed his magnificent century (101* off 86).

100MB @100MasterBlastr
58 minutes ago
Team India have slipped to the 4th position after the penalty for slow over rate.